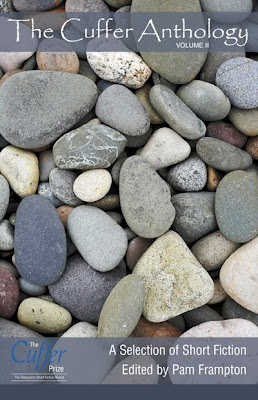 It was about three weeks ago I received an email inviting me to a book launch for an anthology of Newfoundland stories. These stories were a by-product of a contest run by the local newspaper, The Telegram, about 16 months ago. Yes, July of 2009. There were apparently over 200 entries and last November the top three winners were announced, the cheques were presented and that was the last I heard of the matter.
Anyhow, the email invited me to last night's launch as my story 'The Inscription' had been selected from the non-winners to be part of the Cuffer Anthology II. This was fantastic news as I had pretty much written off the story and was considering where else it could be submitted. The story was originally written for one of my night school classes at the university and was submitted elsewhere a couple of times. Those of you who have followed my blog since its messy beginnings may recall this post from June of 2009 where I talk about the birth and rebirth of this story and of another I ended up posting as my first #fridayflash.
For a long time I pondered what to wear to the book launch as I have never attended such a function before. I don't own a tweed jacket with leather patches on the elbows, but did, for a moment consider black pants and black shirt for their slimming effect. I ultimately decided against this ensemble as I didn't want to appear to be ripping off Johnny Cash's style.
The event was really for two reasons. First, to launch this anthology of stories with a Newfoundland flavour and second, to announce the winners from the short list for next year's anthology (which, regretfully, I did not enter). I received my complimentary copy which I will, of course, give to my mother...and I purchased another copy and a copy of last years anthology for myself.
*Sighs*
I have now started a 'collection' (shades of that Cabbage Patch fiasco from years ago) and I will have to continue to purchase one every year and place them all next to the 21 movie James Bond DVD collection on the family room bookshelf.
If anyone wants a sampling of Newfoundland Flash fiction, you can purchase a copy of the Cuffer Anthology, volume II from Creative Book Publishing or from Amazon.ca (though when I last looked they did not have any in stock). There are 34 short stories (1200 word limit) in the book: literary fiction, science fiction, humour and horror. This anthology has it all. The winning entry was 'Holes to China' by Chad Pelley of Salty Ink. His story is about a boy who spends a week digging a hole in his backyard as a means of coping with the fact his father is dying of cancer.
And if that's not enough to pique your curiosity, then perhaps the fact that a wonderful tale called 'Fledgling' by our own #fridayflash regular Laurita Miller of Brain Droppings also made the cut and is included in this anthology. Needless to say we are both quite chuffed to have made the ToC. Our stories were submitted before either of us knew of the other's existence.
A word of warning, though...both Laurita and I strayed from our horror comfort zones and got literary with our small-town tales. The Cuffer prize has proven a great way to promote writing within our province and some of the proceeds from the sale of the anthology goes to Literacy Newfoundland and Labrador.
Posted by Alan W. Davidson at 10:36 PM

Congrats, Alan! We'll have to do something about that lack of a tweed jacket.

I love going to a good book launch - not that I've been to that many! - I love meeting like-minded people to myself and having a drink and a chat...makes me feel part of the writey world!! :D

That's tremendous news, Alan! I hope you had a a great time! I think it's amazing that both you and Laurita are included and didn't know each other at the time.
You had better get moving on entering next year's contest; since you have already decided to collect the books, you might as well be in them!
And what a great idea the Cuffer Prize is.. I wish our local newspaper would do something similar.

Very Cool! Love the reference to 'starting a collection'.
Sorry I missed out on the last meeting. Don't give up on me :)

Woot! Congrats to you and Laurita! I second Cathy's suggestion - if you're going to collect them, you might as well be in them. Go. Write. Something.

Congrats! Your story was excellent. It certainly deserved a spot in that book.

Caroyln- I bet you could whip up a story about home in no time.

Aaron- Perhaps you could send me your cast-offs...doh! I forgot about that 6" height difference!

Cathy- Yep, we're already at work sharpening our pens for next spring. Perhaps you can help raise some cash from a sponsor and approach the local press with the idea?

Debbie- That's a collection I don't mind being part of...we'll see you at the next meeting for sure. We'll be pushing you to submit to the Cuffer in the spring as well!

Laura- Thanks very much, Laura. I shall start cracking that writing whip.

Laurita- Thank you, kind lady. As did your story. 'Fledgling' showed a lot of depth and I enjoyed it very much.

I just purchased a copy (well 2 really, 1 is for my sister) and I hope you will sign your story in my copy.

Did Laurita fwd that email I sent to her re: the title suggestions I came up with for you?

Congratulations! Loved your story in the Cuffer Anthology. Loved Laurita's too. (Her's brought a tear to my eyes.) For those who haven't read them yet... buy a copy and check out pages 113 & 63.

Hey, congratulations Alan! You're in there with Laurita. Looks like quality.

Congratulations Alan--and ah, another completist! I love it--that's a collection worth having. (As are the Bond movies, naturally, but you don't need me to tell you that.)

Wow, Alan! That's fabulous news...congratulations! And what a great group of marketers they must have, encouraging everyone to purchase every years edition for their library.

But the burning question still remains: What DID you wind up wearing??

Ellen- Thanks! I didn't get the names. Click on my email under my profile info and email it direct.

'V'- Laurita's was a great story. I'm glad you liked both of them.

John- Thanks John. It's nice to be included in an anthology with other local writers.

Katey- Yeah, some collections just need to be completed.

Kathryn- Thanks. Yeah, the publishers were there and selling vols I and II wrapped together nicely with purple and green ribbon (at a discounted price for the pair). What was I wearing? Ha! Now that's just your NY showing!

Congrats on the anthology, Alan. I do love a good book launch.

Nuthin' wrong with small town tales... I love them.

Nicely done! Congratulations to you both.

"I received my complimentary copy which I will, of course, give to my mother"

Made me laugh out loud. But I'm pretty sure you're supposed to buy five copies for your mother.

*goes off singing Cover of the Rolling Stones*

Danielle- Thanks. You sound like a veteran of such things.

Ant- Right on. I've read a few stories in this book and its full of them.

Karen- Five copies for mother? Don't know what she'd do with them all! I've got this song stuck in my head for some reason or another...

Danielle laP- Thank you kindly! (from both of us)

Cate- Thanks, Cate. This is all so new and foreign to me...

Paul- And thank you too, sir!

Congrats, Alan! With you and Laurita in here, how can I resist the book?

Jodi- Thanks! Look at you, giving into temptation!

Joni- And Happy Thanksgiving back at you.