Evening at the Emergency

A couple of afternoons last week I had a problem with chills followed by fever. It didn't concern me...the entire event lasted only a couple of hours. It's the season when people get the flu, so I figured something was coming on. I never developed a head ache and wasn't sick. On Thursday I woke up to a chill, followed by fever. There was no way I could work and I called in sick to corporate HQ. I felt better after a couple of hours and talked with my sister who is visiting from Edmonton.

By mid-afternoon the chills returned and I lay on the sofa, covered by a blanket, shivering for a couple of hours. V came home from work and stuffed a thermometer in me (my mouth). I had a temp of 103 F. She called our Dr.'s office but he was just closing up for the day and suggested she take me to the emergency department of the hospital. She drove and I sat with a plastic container in my lap (just in case...we didn't want a repeat of the 'vomit volcano' in the van as happened with the boy earlier in the year).

The ER was fairly busy (when is it not?) and we were told it would be a 3-4 hour wait. I was surprised, though, that 5 minutes later I was called to see the triage nurse. I went through the ritual...pulse, blood pressure, temperature, pee in a bottle...I was a bit surprised when she sent me off for a chest X-ray...in a wheel chair! I think the rolling chariot was a response to the 103F I scored on the thermometer. THAT and the rapid heart rate. I guess it's bad for business if one keels over with a heart attack while wandering the crowded corridors of the ER...

When I got back from X-ray I was put in the 'Plaster Room' across the hall from the triage nurse. I think I was kept there, with the crutches and tensor bandages, in case I was carrying some nasty plague. Or perhaps my fez was a distraction to the huddled masses in the waiting room. Anyhow, I was soon put given a 'johnie coat' and told to put it on. "Should I strip right down to my socks and underwear?" I inquired. The nurse looked horrified. "Please...No. Just take off your shirt. That will be fine."

I was then put on a hospital gurney and left in the hall of the ER with a couple of elderly people. Obviously we were going to have to wait a while to reach the promised land behind the sacred double-doors. A girl came along and took another blood sample. This was apparently to make blood cultures. She assured me that the little glass bottles she carried didn't contain alcohol and I shouldn't drink them....Har! Humour, that's the ticket. I passed the time by watching the comings and goings of injured people. That, and the little man that occasionally passed by on some sort of ride-on vaccuum cleaner. Who WOULDN'T want that around the house!

I eventually saw the ER doctor. He poked and prodded my stomach, listened to my chest and generally asked a lot of questions. The bottom line was that I wasn't showing ANY other symptoms besides the chills/fever and rapid heart rate...both of which were now gone as the nurse had given me a couple of ibuprofen earlier in the visit. He could not explain what was causing the fever. He was curious about my previous history with liver function problems (many years ago) and issued me a form to go off for more blood tests. It was a long six hours, yet pockets of time flew by rather quickly.

I'll be off to see my family Dr. again in a few days. It was a strange way to lead into a long week end, but the past four days have past uneventfully. We went for a nice turkey dinner at my parent's house yesterday. It was nice to have the entire family back together again. Many thanks to the stalwart 'V' who hung out with me at the Emerg and asked all of the pertinent questions that I was too stupid to think of. She also took a photo or two on her new phone. I'll inclued one. You won't want to see the other pic as the 'business' end of the johnnie coat may have caught a breeze and blew open...it reminds me of that time with the kilt... 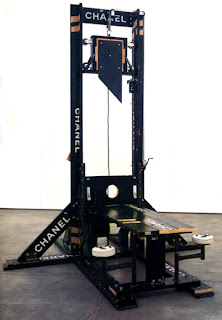 In some foreign country a priest, a lawyer and an engineer are about to be guillotined.

The priest puts his head on the block, they pull the rope and nothing happens -- he declares that he's been saved by divine intervention-- so he is set free .The lawyer is put on the block, and again the rope doesn't release the blade, he claims he can't be executed twice for the same crime and he is also set free.

They grab the engineer and shove his head into the guillotine, he looks up at the release mechanism and says, "Wait a minute, I see your problem..."


I figured it must be pick on engineers week somewhere in the world.
Posted by Alan W. Davidson at 12:04 PM 7 comments:

Today's stormy weather (leftovers from hurricane Ophelia) pushed some toasty weather at us on Friday and Saturday. We reached a balmy 22C (74F) over the week end. Yes, for Newfoundland THAT is balmy. We've reverted back to normal temps as we dropped down to a misty 10C yesterday (50F).


The weather yesterday and today has been damp enough to bring out slugs on to the front walk. They are actually 'miniatures'...only about 1/2" long. There was a tiny snail as well, about the size of a pinkie nail. It makes what I call the "Double S Shuffle" to the driveway a bit treacherous...nobody wants to hear that cracking sound beneath their foot while walking. A little bomb going off. Worse yet, you don't want to look back to see that the slug you thought you had narrowly avoided has mysteriously disappeared  *peeks under foot*.
All this talk about cool weather and slimy things has me thinking about a couple of incidents of 'bad behaviour' in the hockey world recently (this IS a blog by a Canadian guy...how are you NOT going to hear about hockey on a semi-regular basis?).
Here is a link to a story by a sports writer who received a racist message on his answering machine. The message was not directed at him per se, but at the management of the new Winnipeg Jets franchise for its having 5 black players on the team. The caller spewed a lot of 'Feks' and 'N-Words' in his rant. He apparently was miffed because he could not get tickets to a game and took it out on the sports writer for some reason....
In a similar tone, about two weeks ago the Philadelphia Flyers were playing an exhibition game against Detroit in my old home town of London, Ontario. The game went to a shoot out and as the Flyer's Wayne Simmonds skated towards the net for a shot, a banana was thrown on the ice in front of him from the upper deck. I should add here that I probably attended over 100 Knights games while living in London and never once saw any sort of fruit be tossed onto the ice. Let alone a banana as a black player was shooting the puck. The player ignored the racist insult, by the way, and scored on his shot. Link to story here.
There was a lot said in the media about the incident, both nationally and internationally. I have heard some talk reflecting the notion that it really wasn't THAT big a deal. Right...
London is a conservative city, and the incident speaks to the racist tones  that lie just beneath the murky surface of civility. Both the banana and racist call incidents may be isolated cases of A-holes popping out of the slime, but they really indicate a racist sentiment still plaguing society. I think that this giant 'melting pot' needs a stirring.
On a side note...the 26 year old banana thrower in London was identified. The police felt that his actions did not warrant a hate crime but he was "...served a summons for engaging in a prohibited activity under the provincial Trespass to Property Act." That and the arena may ban him for a season or longer. Ouch! That slap on the wrist must really hurt. Though the man has retained a lawyer...
Second side note...Wayne Simmonds, the target of the banana thrower, was involved in his own scandal just days later in an exhibition game with the New York Rangers. Simmonds was in a scuffle with Ranger's tough-guy Sean Avery when Simmonds uttered a homophobic slur against Avery (yet another story link). For those of you who are unaware, Avery became something of an advocate for the gay rights movement when he endorsed marriage equality in the state of New York earlier this year. I guess that Simmonds didn't like that and spoke his mind in the heat of battle.
So much bad behaviour occurring around this simple game of putting a rubber disk into a net. It seems to me that folks have got to give their heads a shake and start growing the hell up. Behaviour on the ice and around the ice should be no different than in any other segment of society. People have got to get the message out that this sort of behaviour has never been acceptable, is not acceptable and never will be acceptable.

*Gets off soap box*

I'll close with a final link to a story by long-time sports writer Morris Dalla Costa of the London Free Press after the banana incident. The article is titled 'Silence can be Racism."