Upon closer examination, isn't life really a series of firsts?

Your coming of age...your first date, first time driving a car, first time having sex (with someone else).

I have of course driven a car but have not ridden a motorcycle. I did ride on the back of one driven by a male college classmate of mine. High speed and a late spring snow storm made the two hour trip a special experience. I clutched him from behind in a most un-manly fashion. I hope that I didn't leave scars (either physical or psychological). The motorcycle fiasco was both a first and a last for me. Though one day I still hope to attend the Friday the 13th bike rally that occurs in Port Dover, Ontario. Every Friday the 13th, the population of that quiet, Lake Erie town of 6400 rises by tens of thousands.

The firsts continue in the adult years. The job, the first marriage (I say first because some people treat marriage as sport that should be indulged in with semi-regularity like mud wrestling or bowling) and the birth of the first child.

I experienced another first on Friday. I had booked the day off work as a technician was coming over to wire up the house with FibreOp that is now the new rage. V and I drove to the office of 'the competition' to return their cable box. The run around that we received from them only reinforced the notion that we had made the right decision in switching companies. Anyway...after that stop, V wanted to stop at a public park where she knew that a co-worker was getting married. This woman has only been with the them for three weeks so none of the staff were invited to the wedding. As we walked past the park the bride recognized V and waved her over and invited us to witness the ceremony.

I have driven past that park many times before and have never noticed the stand of pine trees in the north-west corner...past the public swimming pool and just east of the ball diamond. The trees formed a tight oval and the group of 30 or so family and other witnesses stood on top of the small, grassy mound within the stand of trees.

The wedding was the first that I have attended in my six years here in Newfoundland. The day was sunny and warm and the two women held hands as the vows were read and the marriage was made official and binding. The wording struck us as similar to our own wedding. Simple vows and one reading by a guest and the ceremony was done in about 15 minutes. The wedding was obviously a low-budget affair, yet its simplicity was charming and easily one of the nicest weddings that I've ever attended (and the first I attended that I was NOT invited to).

When I got up yesterday morning I didn't think that I would be 'crashing' my first gay wedding.

I should try that again some time. I wonder what tomorrow has in store...
Posted by Alan W. Davidson at 11:58 PM 5 comments:

It's that special time of year.

On The Rock we finally get warm weather AND a long week end. In fact, Canada Day passed three days ago and we had a short get-away at my parent's house 'up the shore' (thanks, Laurita, for the correct local terminology...).

Today is now the fourth of July and our one-time adversaries, our American  cousins, celebrate their Independence. It is also the 200th anniversary of the start of the War of 1812 (which ran until 1815) when our cousins dropped by, unannounced, for a visit. I don't profess to know anything about that war so I won't go any further on the topic, embarrassing myself on my lack of Canadian history. Honestly, I don't recall it being taught in school. Then again, school was decades a long time ago and maybe I just forgot. Or maybe I was sick that day.

The Canadian government commissioned the minting of a new coin commemorating the War of 1812. It is a handsome looking 'toonie' with the image (below) of the British frigate HMS Shannon on one side and the aged Queen on the other. 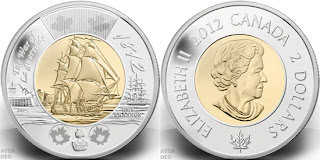 Speaking of war ships...the boy is ready to wage his own battle with his own bateau (Har! Get it?...bateau?) When we arrived at my parents house we discovered a row boat sitting in their driveway. It was a well-used craft belonging to the former home owner who figured that since Sean was a sea cadet, and a future sailor in the Royal Canadian Navy, he might appreciate the boat.

Now begins the task of stripping the hull of flaking paint, old caulking and sundry dried out sea vegetation and freshening it up with a layer of fibreglass and paint. Sean's Papa Davidson, a painter of 50 years, has already begun the tedious task of researching  how to start a good fire fibreglass the boat and the fine art of applying marine paint. I had suggested to the boy that he name the vessel after a girl in his life. We decided against that as the boat would obviously have to change name on a regular basis...

I have included photos below. Be sure to click on them to enlarge.

SO...to my American friends...have a great day! I hope that you booked a couple of extra days to extend the holiday into the week end. Have fun with those fireworks, but keep them over there.

And no hard feelings about that war business, eh?