Fodder for the 'Horror Heads" 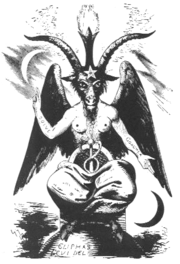 If I can digress to the last post...I was going through old boxes that take up floor space of the closet in my office; I was looking for evidence of some sort of misadventure from my youth. I came across an envelope labeled "Articles of Interest" (the title being hand-written in crayon, of course). There was an story from the Vancouver Sun about the "Guardian Angels" written in 1981. There was another story from the same era about street kids in Victoria.

More interestingly, though, was an article about a witch in Victoria in 1981. She mentions that she did not make a conscious decision to practice witchcraft, that it was her family chose it for her as she demonstrated psychic tendencies. Her ancestors were witches dating back to the 15Th century and the family practice was handed down from father to daughter, and from mother to son. In this way the name changed constantly and no one name was associated with witches. Her services ranged from exorcising spirits to reading Tarot cards, from reading crystal balls to reading leaves in tea cups (on a side bar--I used to have an old Scottish auntie that read tea leaves...).

And more interesting than that? I found a story out of the old Victoria Times-Colonist (June 19,1982) about rumours of satanist practicing in Victoria. Having grown up there, I had heard plenty of stories about this sort of thing (again, the Urban Legend). The only piece of hard evidence the reporter had was a yellow sheet cut into a hexagram in a local park. It was believed that at least a dozen groups were operating in the city and the police kept a file on satanic activity. Stories of black candles being found in parks was not unusual and a local hospital had been on a state of alert due to rumours that a satanic group was going to sacrafice a new-born infant. What may fuel some of this is the belief that satanist Aleister Crowley lived in Victoria for a while in the 1920's, residing on Fort Street and making movies. Sinister.
Sounds like fodder for a story to me...

Catherine J. Gardner's post today, on her blog The Poisoned Apple, had to do with finding old diaries and reminiscing about the entries. Particularly the ones regarding writing endevours. I commented that I had not kept one and it was just as well as there was pretty much nothing to report between the ages of 12 and 20. I suggested that for an interesting read we could crack open one of my old university chemistry lab books...much more entertaining to be sure. The whole science thing got my thought process on a tangent.

I flashed back to public school where we had to take a chicken and boil it in a pot until all of the meat and skin could be taken off (this nasty task, of course, fell upon my mum). We then had to take apart the bones, dry them, and rebuild the bird in some sort of a striking pose. On another occasion, high school I think, we had to discect a cow's eye. I recall the teacher bringing the plastic pail of eyes into the class, the orbs all packed in crushed ice and staring up at us with an accusatory stare. The final nasty flashback is of biology class in university when we had to disect a frog. I had been out all night drinking with friends and got about 1 hour of sleep prior to the 3 hour lab session. I desided then and there the mutilation of wee beasts was not for me. Myself and another burly young man defered the scalpel weilding to the woman of our threesome...which leads to the conslusion that this sort of business is best handled by the fairer sex...or was it: don't mess aroung with a woman holding a blade. You get the picture!
Posted by Alan W. Davidson at 9:47 PM 4 comments:

What's in a Name?

Last week I visited Erin M. Kinch's site, Living the Fictional Dream, and read her post about the difficulty in naming characters. She talked about giving characters names that start with different letters to avoid confusing the reader. Also the character's name is their identity and say a lot about who they are. I commented, mentioning that I have a page full of names gotten from the pile of junk mail that arrives in my mail box each day. Here are some of my favourites:

Sheila Molina, King Cuthbert, Lance Jasper, Misty Willis, Clay Hewitt, Cyrus Sexton, Mattie Pagan...and the list goes on. The cool part for me was that a number of the random surnames matched common ones I see regularly on the island and would fit into a story set locally. So, next time you require a character name you need not go any further than your inbox.
Posted by Alan W. Davidson at 10:24 PM 2 comments:

Ideas Come From the Strangest Places...

I have recently read blogs about writing stories and where there ideas possibly come from. While listening to the morning show on a local "classic rock" station, the announcers were asking people to call in with Newfoundland urban legends. Below is a sampling:

-the ghost of a nun that haunts a the gymnasium of a former Catholic school.
-a man who once drove a car off a cliff to win a bet for a bucket of chicken.
-a light at sea representing a woman thrown overboard from a ship.
-the "headless guy" that haunts the area of a church on Queen's Road.
-story of children keeping loose change in pockets to stop fairies from stealing them away.

Somewhere in there a strange story has to exist...
Posted by Alan W. Davidson at 6:52 PM 7 comments:

I'm sitting here working (well, at least on a coffee break...) watching the snow fly outside. Yes it's the last week of May, I'm sporting a slight tan, and there's snow on the ground. The tan is from being outside recently in the scorching 20 deg. C. temps. painting the shed (some of it). Today it's 1 deg. C...it's enough to drive someone to work, or even writing...

Perhaps I can use this to my advantage and create a short story around the subject: young(ish) professional draftsman/amateur writer gnaws off own arm (not his writing hand, of course) to escape icy spring storm and to provide him with a source of nourishment. Yes, I have been reading too many horror stories recently. Hmm...summer is only 26 days away...
Posted by Alan W. Davidson at 10:14 AM 1 comment:

I have no preconceived idea where this blog is going, or if I will even have the time to keep it up (the blog) on a regular basis. I am hoping to connect with other novice writers to share ideas on how to get the job done.
Posted by Alan W. Davidson at 5:56 PM 1 comment: