Aug 28, Alan remembers that he has a Blog

Just yesterday it occured to me that I had been back from vacation for about 10 days and had done nothing with the photos that V had downloaded from the camera. I had promised myself the next blog post would be about our 5 days on the west coast (of this island). It was a real treat for me as we were covering places that I had never been before.

It was mid-August and the weather on this Rock had finally warmed up a bit. As a result, both flora and fauna were well represented...


﻿ ﻿
﻿  ﻿﻿﻿﻿ ﻿﻿﻿﻿
Well, yeah. So maybe llamas aren't the norm here, but we got to visit that character and his buddy alpacas at the Alpacas of Newfoundland on the Port au Port Peninsula, west of Stephenville. The drive around that peninsula was very scenic and we got a feel for the French heritage of the area.

Part of the trip was taking in four plays over five nights. The highlight for me was 'God of Carnage' at the Stephenville Theatre Festival. It was done in a small square room with only 25 seats for the audience in each of the corners. We also saw an interesting play called 'Stones in His Pocket' at the Gros Morne Theatre Festival in Cow Head. The story is about two men working as extras in a Hollywood production being shot in a small, Irish village. The fascinating, and at times hilarious, thing about this is that all of the parts are played by only two men with a minimum of props about them. Well worth going to if it's playing near you.


While in Gros Morne National Park, we took the boat tour in Western Brook Pond. This should be a stop for all who visit the park, a UNESCO World Heritage Site. It is a scenic 45 minute hike through woods and a bog to the marina and a two hour boat trip down the pond (that is about 16km long). The water is over 500 ft deep in places and the rock walls on either side tower above at about 2000 ft. The weather thankfully cooperated and we had a wonderful time (though they really pack folks (capacity of 165) into the two boats. Note that this glacially created fjord is now fresh water and closed off from the ocean and the first tour boat had to be brought in overland through the woods.

Below are a few photos from the boat tour. I'll let the scenery speak for itself... 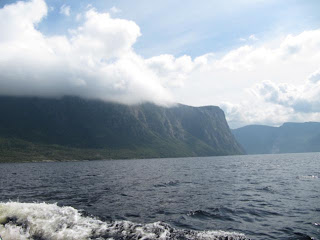 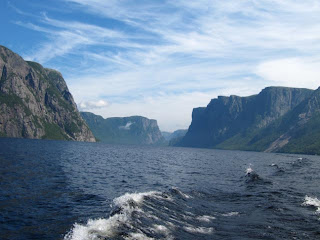 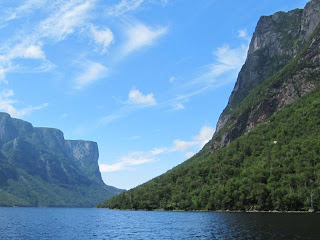 I have been avoiding TV and Internet stories about the rioting in England the past few days. It's a bit like a car crash, though, isn't it? You avert your eyes yet still take a peek on the way past to safer ground. I was shocked at the rioting in Vancouver after the Stanley Cup finals, but Britain has elevated it to a whole new level. I'm all for rightful protest and even a little civil disobedience where required but there seems no point to what has been going on in London...and Manchester...and Liverpool....and...

Anyway, I won't go on about it but my thoughts go out to my writing friends living in those cities and wish them all a quick return to normal (whatever one's definition of THAT may be).

I'll be out of town for a few days. As in no Internet access. Not quite living under plastic in the wilds but still no means of keeping up with the bloggy worlds of my friends. And speaking of friends...

I've been a lazy sod for weeks as far as writing is concerned. Not so for some of my longest running cyber-buddies: 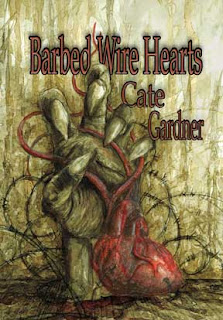 
KV (katey) Taylor is a busy girl, what with the blog Spec Fic and Nonsense AND taking care of business at The Red Penny Papers, that fine quarterly electronic journal. Somehow she even finds time to write (I'm so jealous). Her debut novel Scripped, an Appalachian Faerie Tale, is available to pre-order from Belfire Press. 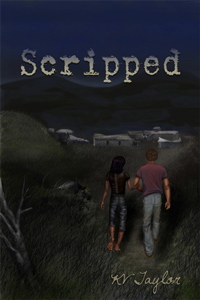 "In an attempt to escape constant arguing, Jonah Gray wanders away from the family cabin deep in the West Virginia wilderness. But he wanders too far, over the borders to a Faerie land that could only exist in Appalachia.

Faerie-napping, cold knives, underground oppressors, horror stories, and unwilling affections threaten to suck him forever into their desolate Company Town. If they do, he’ll lose himself in every way possible.

You might escape the fae, but you can never go home. Not really."

And finally, my pal K.C. Shaw's The Taste of Magic has been released as an ebook from Etopia Press.


"Analefa Miradwen has spent the last ten years avoiding vampires. She knows her blood is a delicacy, but she doesn’t want to share. Not after the last time, which nearly left her dead.

When the vampire mage Magnus begins stalking her, Ana turns to the King’s Enforcer for help. Vincent Ondarr has the manpower and the magic-power to keep her safe. According to him, Ana’s blood doesn’t just taste good, it enhances a mage’s magic.

The trouble is, Vincent’s a vampire mage too. If Ana wants to keep her blood to herself, she’ll have to figure out which one of them she can trust. And what exactly Magnus wants from her..."
Posted by Alan W. Davidson at 8:49 PM 10 comments:

The boy and V and myself went to see the new Harry Potter movie on Sunday. I know, it's been out for ages. We prefer to wait until the smoke clears a bit and the pandemonium has died off a bit. And to answer your questions...NO. I did not dress up like Dumbledore, or Draco or even Dobby. I don't have enough beard to be the wizard and I prefer to leave the school boy outfit to Angus Young of AC/DC...

It amazes me how each movie in the series has gotten progressively darker. The first one was positively carefree in comparison to the last one. The subject matter in the last couple of movies doesn't seem like something that you would want to take young children to see. I have never read the books, so I can't comment on how the movies compare to the books. Perhaps somebody can comment on that. Maybe I'll get to the books one of these years.

I'll include a one minute Harry Potter summary for those, like me, who are way to busy to read all of the books. It's a cute thing stumbled across on the Internet a few days ago.

On a side note, it is Regatta Day here in St. John's. It is the 193rd instalment of the longest run annual sporting event in North America. You can read about it here. The city is more abuzz than usual as Russell Crowe is in town. Not so much for the regatta, but he has released an album with local singer Alan Doyle of the band Great Big Sea.  They will be performing together in a pair of fundraising concerts this week and are promoting the release of their new album "The Crowe/Doyle Songbook, Volume III" (also featuring Crowe's wife, Danielle Spencer) available only on iTunes. Crowe and Doyle, along with two other "merry men" (Scott Grimes and Kevin Durand) from last year's Robin Hood movie are also on set to shoot for an episode of CBC's Republic of Doyle.

You can link to an interview with the pair (Crowe and Doyle) by CBC here. I'm hoping that it's accessible by my American (and Australian) friends.
Posted by Alan W. Davidson at 1:13 PM 10 comments: