Pirate Girls and Adventure on the High Seas

I think that my lack of posting anything at all may stem from the fact that this blog was set up to talk about scandalous gossip writing projects. The fact that I have written virtually nothing for months, I think, has weighed heavy on me and I've developed this idea that if I'm not writing then I shouldn't be blogging either. I mean, there's only so many times that people want to visit here and listen to me rant about hockey riots or my back issues...or the fact that I'm too lazy busy to write anything (or can't think of interesting stuff to write about).

I was driving somewhere the weekend and a car in front of me had a bumper sticker that made me smile... 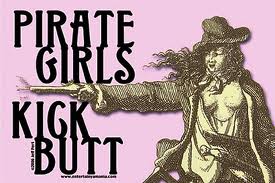 The sticker, of course got me thinking about the incomparable Jodi MacArthur and her "Wicked Woman's Booty" episodes published at Pulp Metal Magazine. Then that led me to thinking about other writer's whose blogs I used to follow but have recently been ignoring. My apologies to all for not being a very good on-line friend. Not even a very good casual acquaintance...

I visited my own blog today and was surprised to find that the visitor count is nearing 30,000. Wow, I guess people have been dropping by in my absense (thanks mum)...I image they visit less to see if I've written anything new and more to see how long I'd go in silence. Perhaps the visit to see if I would let the blog go fallow for a whole season, or maybe to see if I'd give up the entire crop for good. I can't promise anything in the way of productivity. I may post again in two days or perhaps it will be two weeks or even another two months will slip by before I let my thoughts coalesce and the words fly from my finger tips (or something like that). I was also surprised to discover that since I last visited here there have been visitors from five more countries...Gambia, Jersey, Botswana, Uganda and El Salvador. It's nice to see that my lack of writing productivity has even garnered interest in the African countries. I'm not sure, though, why Jersey is showing up all of a sudden. I mean, my on-line buddy Anthony Venutolo is a Jersey boy and has dropped by here many times before...I thought his presence would have showed up on that site meter eons ago...and WHEN did Jersey get it's own flag...probably had something to do with that Tony Soprano fella...

We had a fine Father's Day here on The Rock yesterday. We finally had a 'warmish' day and the Finch-Davidson-Stansbury families again gathered for the boiling of the lobsters. I won't bore you with yet another tale about a crustacean feeding frenzy or scandalous stories about the horrific dining habits of certain family members. The curious can see the pics from my 2010 post...or perhaps the year before...

The day ended for us by driving Sean down to the harbour downtown where he jumped on a fishing boat and was whisked off to sea...I kid you not. We're very proud of the boy as he has had a dream of working on a boat and set out to accomplish that goal. I mean, yeah, it's just for a couple of days. But he got acquainted with a fisherman (the father of another sea cadet) and set out to bug the shit out of him  convince him of his deserving to be there by loading up crab pots on another boat (for free, I might add and for helping off load crab from his boat two weekends running. This is sort of a try-out for the boy as his real goal is to get to go out for turbot fishing for 9 or 10 days about 150 miles off our coast in the Atlantic (I suppose I mean ON TOP OF the Atlantic...)

Below are a couple of photos from last night. The first is Sean waiting at the dock for Cap'n Rodney to arrive. I won't name the boat (to protect the innocent) but if you get a magnifying glass you might be able to make out the name. V took the second photo from Signal Hill looking down into the Narrows where the fishing boat was passing through headed out into the Atlantic. 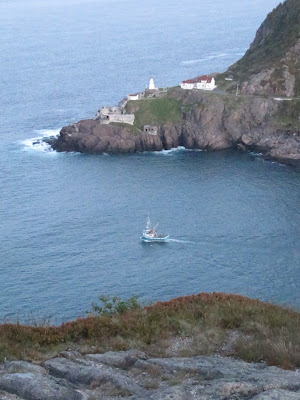