When one I was younger, one of those products was very popular with me...

OK, maybe I'm getting a bit ahead of myself but my opening remark will make more sense by the end of this post. Honest.

Myself and V recently spent a few days in the Gros Morne area. A little getaway while the boy is attending sea cadet camp in Nova Scotia. We again vacationed  'in country'  this year because  a) it's way too expensive to get off of this island and  b) we are saving our money because we'd like to do some home renovations in the spring.

I will eventually get around to posting a few photos of the Northern and Baie Verte Peninsulas. However, I am at the mercy of my technical wizard who has not yet magically moved the photos from the camera/Playbook to the computer.

Our hotel in Cow Head (for some reason, a place name that always gets me thinking about "The Godfather") surprised us by giving us a room key to a cabin instead of a hotel room. This cabin, in fact, was a bungalow with five rooms. The front two rooms had unimpressive views of the gravel parking lot but the three rooms at the back had back doors that opened on to small decks with a fantastic view of Shallow Bay. We could throw a rock and hit the water. Nice.

We had to walk a couple of minutes to get to the hotel for meals and to attend the plays performed nightly in the theatre next door to the hotel. We also made several pilgrimages to the hotel for ice to keep our beverages cool. It was on one of these runs that I noticed all of the items for sale in the vending machine that shared the same alcove as the ice dispenser. Chocolate bars and chips aplenty. They even had the foresight to put in little bags with shaving stuff and toothpaste and other toiletries that may have been forgotten at home.

In the bottom left hand corner of the vending machine (behind the grubby, fingerprint-smeared glass) I spied two items that made me laugh. Let me clarify...it wasn't the items as much as their juxtaposition that was the source of amusement. To the right was a small packet of Fritos BBQ Hoops for $1.50 and to the left was a single Trojan condom in a shiny blue wrapper for $3.50.

Alan's disclaimer...I am not officially endorsing either of these products even though in my youth one of them was very popular with me. 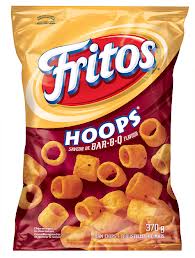 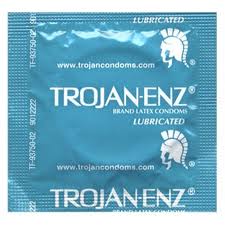 While V hunched over the ice machine, coaxing out its semi-solid contents, I gazed at the two items in the dimly lit corner of the vending machine and wondered how many men over the years have laboured over the choice of which 'RING' to spend their limited vacation dollars on. Or how many kids have thought, "That's WAY too much money for a water balloon!"

Remember: get the one that gives you the most happiness.
Posted by Alan W. Davidson at 5:21 PM

Oh! i remember Cow Head and Gros Morne! What a beautiful place. Hope you and V had a great time - by the way, which thing did you buy? (I would have totally bought the Fritos.)
Looking forward to your photos!

I've never had the hoops, but I remember eating bugles when I was a kid. The fun with them was putting them on your fingertips as "claws" -- now my brain is running down the idea road where I'm wondering what the circumference on the hoops are and what an adventerous person might do with them.

Personally I'd have bought both, segmented the condom with the hoops, filled it with colored water and created a lifelike caterpillar sculpture for displaying on the lovely deck.

This is really funny. I hope years ago the costlier item was the cheapest. Never saw those blue ones in any vending machine.
Hope you learn from the wizard that uploading pics is a snap!